There are so many details when you start looking closely at this deck of cards. Lots of thought went into every aspect. We'll tell you most of them but we are keeping a few secrets for ourselves! Scroll through for details on individual cards.
SECRET MARKINGS
This will be a marked deck, see the "SECRET MARKINGS" page on this site for more details.
All of the faces of the cards also have a one-way design for more magic trick possibilities.
HAND DRAWN
Every single aspect of this deck is hand-drawn, including the card backs, card faces, and tuck box. 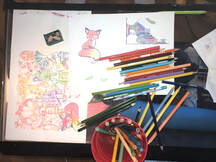 PRINTED BY USPCC
Famous for their Bicycle, Bee, Tally-Ho, Congress, Hoyle, Aviator, Aristocrat, KEM, and several others, USPCC was founded in 1867 and has been making cards for more than 150 years! The brand that every magician trusts. 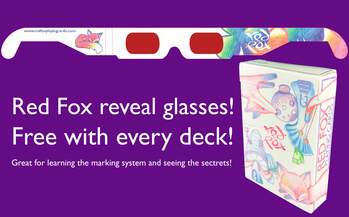 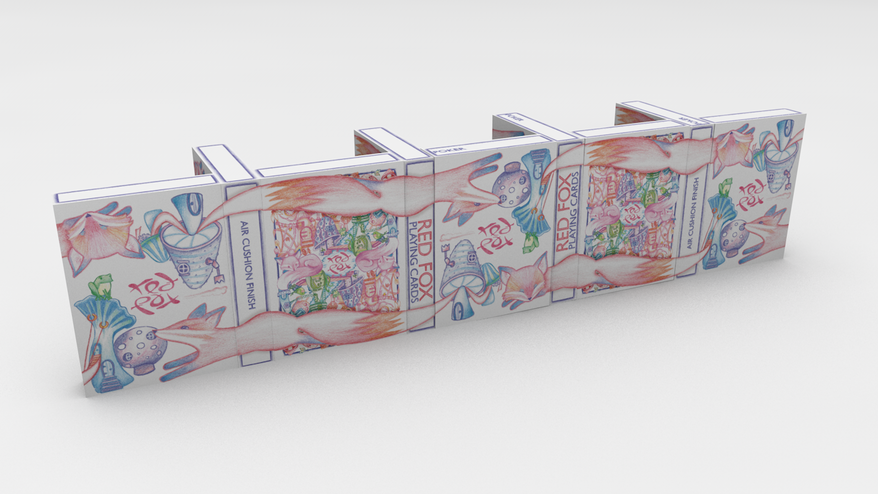 CARD BACK
A rotationally symmetric card that includes an ambigram in the center (reads "red fox" even when turned upside down). The colours were specifically chosen to be aesthetically pleasing, while still functional as a marked deck of cards (see SECRET MARKINGS on the website). Hand-drawn whimsical, with a touch of steam punk, this design holds the artist's last name in the design. The two coffee mugs within that house are for the creators. Viewed through a red filter, you will easily learn the marking system while the fox closes his eyes in appreciation that you have learned the secret.

THE JOKERS
The "Hello" Joker, or sleeping fox, features the bird from the card back. When viewed through a red filter, the sleeping fox will open one eye and peek at the bird, while you see the word "Hello" hidden within the mushroom.
The "Good-bye" Joker is a sitting fox and says Good-bye to our bird, while leaving a clue of where it went. When viewed through a red filter, this fox will wink at you as you see the hidden "Good-bye" inside the mushroom.

ACE OF SPADES
While matching the mushroom theme, this ace reads "RED FOX" on the bottom of the mushroom when viewed through a red filter.

KING OF SPADES
This King sports yellow gears on the sleeve,
a yellow and green ladder on his sleeve by the sword from the green "ten Hove" mushroom,
the clock from the marked mushroom,
the flower from beside the clock on the marked mushroom
and the words "Hail to the Chief" which look better through a red filter. "Hail to the Chief" is a shout-out to our favourite game Mau.
The time on the clock has a very special meaning for us.

KING OF HEARTS
This king is a likeness of me :),
with a shout out to my career -- I'm wearing Epaulettes,
and have an airplane landing on my shoulder.
The landing strip is the same pattern as green "ten Hove" mushroom.
The words Kelly Cards (better seen through a red filter) were a business name I used for magic shows and busking.
The window in the center is from the marked mushroom.
The white sash is loaded with hinges from the from the green "ten Hove" mushroom,
and the yellow locking gears tie into the gear theme from the back of the card.

KING OF CLUBS
A shout-out to our YouTube star Chris Ramsay,
with his deconstructed logo, you can see tear drops and a triangle within.
The lightening bolts represent his recent Tesla purchase,
and puzzle pieces are a shout-out to one of his favorite hobbies.
Check out his magic, puzzles and vlog videos on YouTube - Chrisramsay

QUEEN OF SPADES
This queen holds the 6 of Diamonds that can be used as a reveal for magic tricks.
The flower she is also holding is from above the yellow tire swing mushroom.
You can see white ants on red that can be found right above the fox on the card back.
Around her neck are purple mushroom bumps taken from the green "ten Hove" mushroom.
The mushroom window on her necklace is from the purple mushroom.

QUEEN OF HEARTS
A likeness of my wife, the artist!
The flower is from above the yellow tire swing mushroom.
The windows on the sleeves are from the little pink mushroom under the bee,
and the mushrooms on the crown follow our mushroom theme.
The red pipes on her sleeves are from the yellow tire swing mushroom,
while the blue gears and white gears keep with the gear theme.
The green leaf in the center of the queen is from the grass by the "ten Hove" green mushroom.

QUEEN OF CLUBS
The Queen of Clubs is dedicated to our daughter -- with all things Reese.
Complete with her name on the card (better viewed through the Red Fox reveal glasses) this card includes a
tiara in her crown,
butterfly on her shoulder,
cupcake in her hand,
her pet rat, "Cupcake",
ballet slippers,
music notes,
ballerina shoes,
a soccer ball,
and a rainbow.

JACK OF SPADES
This Jack is holding the tire swing chain from the yellow tire swing mushroom.
The window on his chest is from the purple mushroom,
and the "Jack of Spades" (better viewed through the Red Fox reveal glasses) are another shout-out to our favourite card game Mau.

JACK OF CLUBS
A shout-out to our son, Maverick!
With his name on the card (seen best through the Red Fox reveal glasses), this card includes
bicycle wheels on his head,
a hot dog collar (with mustard!),
a piano on the shoulder,
his pet snake, "Coco," in the middle,
his pet gold fish, "Fishtail," in the middle,
his pet rat, "Alex," under his hand.
A shout-out to Lego on his sash,
and Minecraft blocks in the middle.
The leaf on his head is from the pot by the purple mushroom.

NINE OF HEARTS
This is a shout-out to our friend, Evan the Card Guy! Go follow him on TikTok @thecard guy or Instagram/youtube @evanthecardguy.
His favorite card is the 9 of Hearts, so we have his hand-drawn face peeking out from the center pip.